Pizza, programming and cars - sometimes in that order.

This was an original piece I wrote for DAZN’s internal blog earlier in the year, that I’ve adapted for a public audience.

In our team we recently created a small new API in Go, to provide editorial teams a more reliable search experience when curating content. In this post, I wanted to share some experiences from starting afresh with Go, through the lens of doing Node.js development.

I’m not advocating to take what you do in Node and take the same approach in Go, but to simply explain the concepts against something you already know and how they are different.

The Go Authors set out a set of values for the language:

Which I feel is a really human way to describe a technical topic like a programming language, and it also resonates throughout the Go community itself, and is documented in the Code of Conduct.

I love that Go is easy to read, has a tiny footprint (a SCRATCH Docker image is around 2mb, not far off the native binary) and can run almost anywhere: X86, ARM, MIPS, PPC, RISC-V, s390x, Web Assembly and there’s even a microcontroller version for the Arduino (TinyGo).

Go is really geared up for smaller applications, like CLI’s, microservices and API’s and it also has a great concurrency model if your application needs to do heavier crunching.

Here’s an example of Go’s simplicity, of how you can add a method to an existing float64 type in Go:

Anyone who can write code, will be able to read this and see what it’s doing.

In this section I’ll be explaining Go workflow fundamentals through the lens of a Node.js developer.

Running and building code in Node.js and Go is simple:

When you build a Go binary, the Go runtime (garbage collection, scheduler, etc) is bundled in to the executable – this means any consumers of your app do not require the Go runtime to be installed (unlike Java, .NET and even Node.js).

When developing your application, you may want to make small changes and see them immediately (for example, an API endpoint or changing HTML markup). In Node.js, you will have seen this kind of behaviour with nodemon, jest --watch, webpack etc.

Unfortunately for Go, this requires a full rebuild, as unlike script based languages, the executable code can’t just be ‘swapped’ out (like you would see with a hot reload).

Fortunately, Go does build quickly – and there are tools out there to give us hot restart behaviour. Fresh is the one we have been using in our team, but Reflex is another option.

Node.js’s REPL (Read Eval Print Loop) is a great tool for trying out language features, inbuilt functions and other experimentation.

There’s not a Go equivalent, but there is The Go Playground that has pretty much the same behaviour. 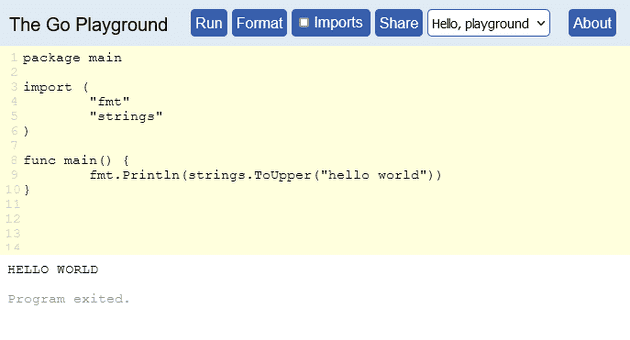 Introducing packages in Go is very similar to Node:

Both commands will update the aforementioned package files, and you can then require/import the package and use it in your application.

They’re not exactly the same, but pretty similar.

npm scripts are a great way to run common commands for testing, linting, building, etc, they are a way of self documenting how to interact with the codebase, for example in package.json you could have:

then if you want to run the tests, just run npm test.

Go has some built in commands like go test or go build, but it doesn’t have an npm scripts equivalent. A typical ‘go to’ is Make; everyone has it installed already (but it can get ugly, quick, and you may fallback to shell scripts):

but it does mean you can run common tasks simply, e.g. make build or make test.

The Go compiler is pretty good at telling you off for certain things (e.g. importing a package that isn’t used). There’s also the go fmt command that will format your code nicely, and this even gets run automatically if you’re using Visual Studio Code.

However, if you’d like something more comprehensive, there are plenty of linting tools out there. The one we picked up in our team is golangci-lint as it has sensible defaults, easy to run (locally, Docker and even GitHub Actions).

Let’s take a look at a HTTP GET request for some users:

if we want to test this in Node.js, we may mock the request library and return a canned response:

now let’s see what happens if we took the same approach in Go (using a request library called Resty):

In Go, we can’t mock the entire dependency at runtime. Go compiles to a native binary, so we can’t just swap out the loaded module at runtime like we do in Node.js.

We need a different approach.

Go has a testing framework built in, so strictly speaking we don’t need any external packages (though you may want to use a package like Testify to simplify boilerplates for spies, assertions, etc).

Oh no, we just wrote a test that uses Resty to make a real HTTP request! If the data on the API changes, or the network is down – our tests will fail! They’ll also run slower than they should. This isn’t good.

What we should be doing, is depending on an interface instead – then we can inject any implementation we want.

and here’s how we could have written the test:

There are things we could further improve here, but I wanted to give an example close to the Node.js approach.

In a nutshell, the Go compiler produces a native binary for the platform of your choice. The runtime is bundled in to the binary – so you don’t need to worry about the target platform having your dependencies installed. For example, if you wanted to produce an ARM build for a Raspberry Pi, you target the ARM architecture and distribute the binary – simple!

This works great for CLI’s or API’s, and simple to run in Docker, AWS Lambda, etc too.

There’s a couple of things you can do. For local development, you can force usage of SSH (and your private key) by modifying your Git configuration:

Obviously for build pipelines this won’t work, and you may want to make use a token: git config --global --add url.https://${GITHUB_TOKEN}@github.com/.insteadOf "https://github.com"

Where ${GITHUB_TOKEN} is your GitHub token with ‘repo’ access. Obviously this will be slightly different if you use a different version control tool.

To finish off, here are some handy resources you can use:

That’s all, feel free to tweet me @AdrianLThomas with any comments.